The world is still reeling from the January 2022 loss of iconic comedian Bob Saget.

His nearest and dearest friends—including a who’s who list of top entertainers—rallied to continue his legacy of support for the annual Scleroderma Research Foundation (SRF) fundraiser, “Cool Comedy, Hot Cuisine.” (https://srfcure.org)

The event was dedicated as “A Tribute to Bob Saget,” and featured titans of entertainment, comedy and music, featuring hosts Jimmy Kimmel, John Mayer and Jeff Ross, as well as new SRF board member Regina Hall. Hundreds of guests gathered at the Beverly Wilshire, A Four Seasons Hotel, in Beverly Hills, on September 21, 2022, for dinner, performances and a live auction, which raised over $1.1 million for SRF—the country’s first and leading nonprofit investor in medical research into scleroderma.

Saget spearheaded the event for 30 years and helped the organization raise over $40 million for its mission to find a cure.

In 2019, I had the pleasure of interviewing Saget about his passion for the non-profit organization, which was driven by the loss of his sister to the disease in 1994.

In our conversation, he expressed, “It’s really quite meaningful to bring entertainment to people that has meaning behind it.” The full interview can be heard on Spotify.

Feniger, who curated the multi-course dinner and helped birth the event, shared how the concept for “Cool Comedy, Hot Cuisine” was inspired by medieval times when the court jester would entertain guests after dinner to get them laughing to aid digestion.

The event has been held since SRF was founded in 1987, and it is the cornerstone to its funding for vital research. Over the years, these events have featured the biggest names in comedy—from Robin Williams and Rosie O’Donnell to Whoopi Goldberg and Ellen Degeneres.

Often misdiagnosed, Scleroderma is a rare and life-threatening autoimmune disease that can cause fibrosis in the skin and other vital organs. In the most serious cases, complications can result in damage to the heart, lungs, and digestive system.

Attendees were treated to a live auction emceed by Joel McHale, as well as comedic performances by Kevin Nealon and Howie Mandel, who joked that it was the first time he had left his house in three years.

The rarest items in the auction included two of John Mayer’s “stage played” guitars at $30k each. He agreed to sign and write whatever was requested on them, as long as it wasn’t any of the words he bans from his social media comments.

The evening included a moving video tribute presented by John Stamos and Mike Binder, as well as a heartfelt set of Saget’s favorite songs performed by John Mayer. 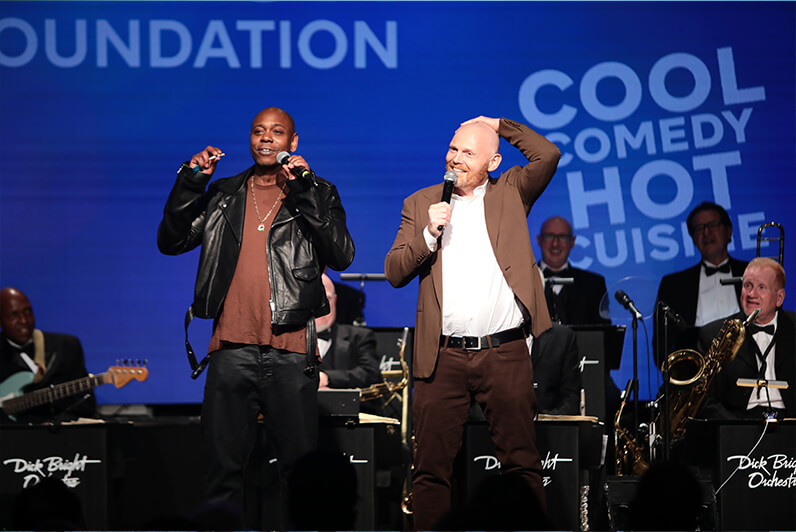 Phones were locked down in individual tiny bags by YONDR for a surprise appearance by Dave Chappelle who called Bill Burr to the stage for an impromptu improv.

Chappelle, who has often been a target of cancel culture due to jokes about the LGBTQIA+ community, gave his plea to the audience, “If you just watch my Netflix special, you’ll get it. I have no problem with trans people.”

Chapelle smoked cigarettes while reminiscing about his friendship with Saget—the “only reason” he would come back to LA—and even played for the audience the penultimate message he had received from his friend.

Chappelle said, “I know Bob is here in this room tonight.”

As he held his phone up with the video of Saget—sharing a personal message that showcased the effusive love that Saget gave freely, mixed with his “did he really just say that” kind of humor—the audience was gifted an unprecedented moment of having Saget’s presence on the stage.

There were many silly stories and memories shared about Saget throughout the night—while head-shakingly humorous, most are not clean enough to share here.

Known as America’s Dad form his days as “Danny Tanner” of TV’s “Full House,” he was also known for his “dirty” brand of humor—as well as his kindness, generosity and sheer love for life, family and friends, who often came together for entertainment with a purpose. The show ended on a hauntingly beautiful rendition of Free Fallin’ by Mayer, who closed the night with a sentiment that seemed to be felt by all in attendance:

Get involved with SRF at srfcure.org.

Heather Burgett is a contributing writer, award-winning publicist, and visibility expert who provides business strategy for entrepreneurs around the globe.